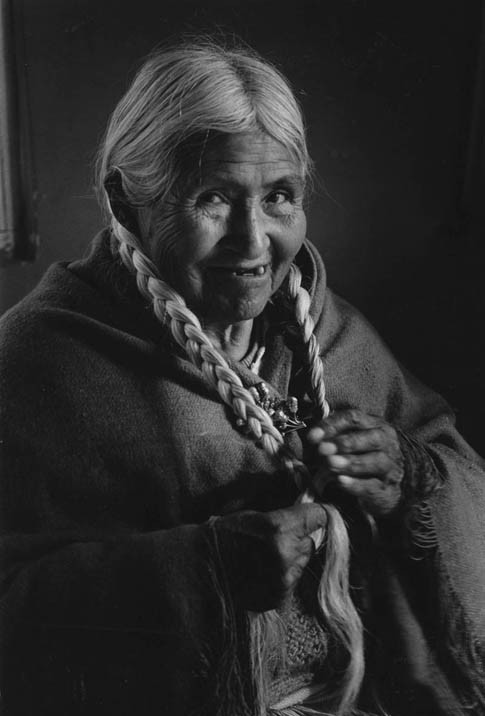 Previous Next
← previous day next day →

Waste not want not

My Mother grew up in Canada during the depression and if she ever noticed anyone at home being wasteful she’d give us a gentle reminder ‘waste not want not’. It helped make us think about how we used what we had. The Mamani’s never used this saying but how they lived brought ‘waste not want not’ to a new level. The kitchen in many homes including the Mamanis is a place to meet, tell stories, eat, rest and keep warm. At night Mr Mamani and his sons would often sit on the mattress nearest the door and sometimes fall asleep as they waited for supper to be prepared. The only table in the room was used as a shelf where, metal dishes, cups, sugar, coca and fruit were stored. The cutlery lay in a heap. Not one fork or butter knife just a couple of dull mis-shapened knives for peeling potatoes and a massive collection of spoons both small and large. When my Bolivian ‘mother’ was young the women would fasten their aguayo’s or shawls for fiestas with a hand made metal spoon pin made of nickel or sometimes silver. It was not just decorative but literally ‘served’ a purpose. During fiestas food was customarily prepared for guests. When women were handed their plate of food their pin would be slid from its woven cloth and used as cutlery. When the food was finished, the spoon pin would be cleaned and returned to the shawl or aguayo it was taken from.

When country people moved to the city they brought their creative and pragmatic ways with them. Dona Paulina, my landlady in La Paz was a traditional countrywoman who relocated to the city. I met her through the Castros who were friends of the family. Like many traditional Aymara women she sold produce at a market stall. She did that for most of her life. Dona Paulina was forced to quit when arthritis made working such a physically demanding job, impossible. Buying produce from wholesalers, transporting, storing goods and weighing produce with hand scales was just too hard on her body.

To bring some income in Dona Paulina turned to renting rooms at her house. When a problem arose and she needed money quickly she was forced to pawn her teeth. “The bridge was worth money because each tooth was trimmed in gold,” she explained. “It was two years before I had enough money to get them back and when I went to the pawn broker they were unable to find them” she laughed.

When you don’t have a lot of resources whatever there is, is used and re-used. A tool is invented and then disassembled and reinvented. In North America we have backpacks. In the Andes there are Aguayos, large square woven cloths. Backpacks, however useful basically carry a limited amount of things in a bag that can’t be altered or changed in any significant temporary way.

Aguayos, are very versatile and may be used as a blanket, table cloth, baby carrier, rain shield, seed dispenser, skirt, shawl, poncho or backpack. The people in the Andean community that I have come to know are masters of modifying, inventing and recycling, building and transforming. ‘Garbage’ is turned into a tool, toy or even a work of art.

So many times I have been on the farm thinking there is no solution to a problem that this time we are really stuck. If only we had a pair of tweezers, a cookie sheet, a bread pan, enough food to make lunch. My ‘brother or sister’ would then transform an empty metal container into a cookie sheet, turn a sheet of paper, threaded with paja brava into a bread pan or add dried out meat to boiling water for soup. Subsistence farmers combined their limited resources with their unlimited imaginations and like my Mother in Canada realize the wisdom found in wasting not to want not.